August 30th, article to be completed after sept 26th.

Well, here we are, once again, another edition of Friday Feature Photos & as always, this was fun to put together, but there's always that finicky side of me that says "Hey dummy, why didn't you do this sooner?!"

Let's start off w/ a quote from this week's Friday Feature Photos honoree:

"Carpe diem; There are no problems, only solutions; as trainer/coach, When I sweat, you sweat! You never fail, until you stop and .... What I fear, I create ...... so be positive in life, creating positivity around you."

In case some don't know, "carpe diem" means "seize the day" & this man, he not only seized the day, he seized continents in his efforts to create an international BMX circuit.
From humble roots as a motocross racer in Holland, it was a trip to the US in 1974 that would set him on a path that would bring people from all over the world together to do this thing called BMX.
He was/is the founder of the International BMX Federation (IBMXF) & since that day, he's been instrumental in furthering the BMX lives of many of yesterday & today's top ranked BMX racers world wide. He brought the American BMX racers & brands to the European circuit, he then expanded his interests in the sport to Japan, Australia & New Zealand.

The coolest thing to come of all that work was the close friendship he developed w/ George Esser, another part of BMX royalty, & his family, a friendship that continues to this day w/ Greg Esser. They now race RC cars together & have just as much fun doing that as w/ BMX in its heyday. There isn't 1 single top ranked European BMX racer that isn't grateful to this wonderful human being for all he has done to not only further BMX, but to further the riders.

His concern for the treatment & welfare of BMX racers dates back to his earliest involvement w/ the sport & continues to this day & yes, he's even an outspoken critic of the UCI.
There's so much more that can be said about this awesome person, but I will let all that be said in the comments from those who know him well. So this week's Friday Feature Photos is all about the man, the myth, the legend & a true ambassador of BMX, the 1 & only Sir Gerrit Does!

As said above, fill the comments up w/ good things about him, I'm sure there's a lot to say! 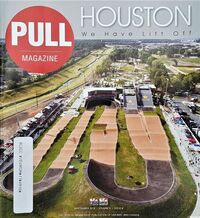 In the current context of the coronavirus (Covid-19) pandemic, which also affects the United States, the Union Cycliste Internationale (UCI) regrets to announce the necessity to postpone the 2020 UCI BMX World Championships which were initially to take place at the Rockstar Energy Bike Park in the United States from 26 to 31 May.

The UCI fully supports the decision taken by the organisers of the Harris County - Houston Sports Authority, the authorities of the city of Houston, in the state of Texas, and of Harris County. In view of the current health situation, holding the UCI BMX World Championships, preceded by the amateur Challenge class, would have potentially posed a risk to the health of the riders, all those involved in the event and the fans.

Regarding the qualification process for the Tokyo 2020 Olympic Games, the UCI BMX World Championships in Houston were initially to be the last event on the UCI International BMX Calendar offering qualification points, since the qualifying period was due to end on 1st June. In the context of the coronavirus and in the interests of safety and sporting fairness, the UCI recalls - as announced on March 15 - that it asked the International Olympic Committee (IOC) to stop the qualification period retroactively as of 3 March, given that until this date, no nation had been prevented from going to events because of the pandemic.

This position may of course be reviewed depending on the decisions taken by the IOC regarding the Tokyo 2020 Olympic Games.

Concerning the postponement of the 2020 UCI BMX World Championships, the UCI will work with the organisers to fix a new date. In accordance with the decisions announced on March 20 concerning disciplines other than road, in connection with the coronavirus, the UCI stresses that the UCI World Championships have priority within the framework of the revision of the UCI International Calendar with a view to the resumption of the 2020 season.

The UCI shares the disappointment of the BMX community after the decision to postpone the 2020 UCI BMX World Championships and wishes to thank the Organising Committee of the Harris County - Houston Sports Authority for its cooperation in this difficult situation, as well as the athletes, teams, partners and all parties involved in the event for their understanding.

November,  Latvian Olympic Committee President, Aldons Vrublevskis not re-eligible for a next turn.

Mr. Aldons Vrublevskis, a BMX pioneer in Latvia, together with mr. Janis Silins, started introducing and organising BMX in Latvia in 1988. In 1989 the Latvia BMX Federation was formed and BMX developed very fast in Latvia resulting in 2 Olympic titles in the Elite Men class by Maris Strombergs in 2008 Bejing - China and 2012 in London - England.