Details
Written by Gerrit Does

Have you ever heard of Cycle Speedway?

As in BMX (a copy of stadion motorcycle moto-cross), cycle speedway can be seen as a copy of motorcycle speedway. Since I know just a little about this sport, I want to share this knowledge with you, because it might add a new dimension to cycling sport in general, world-wide.

I do remember from the early days (1955/60) when I was 10/15 years young, that in the city of Hilversum (Holland) were I was living at the time, we did have an official Cycle Speedway track. I watched a rider practice several times on that track and later on I learned he was a World Champion in his class. His name is Martin van de Brakel.

Cycle Speedway in some form existed as early as in 1927 ! The year 1947 is generally considered as the official birth of organized racing in Great Britain, were it all started. On May 30th. 1949 the first home international match at Rayleigh Stadium, Essex - England took place:  England (South) did beat Scotland by 88 points to 32. Team competition was the main thing.

Ofcourse (!?) certain differences of opinion arose and in 1959, a rival body was formed, called the British Cycle Speedway Federation (BCSF). Finally in December 1971 top administrators  of both organization came together and decided to start working together.  A truly national body was now formed called the Cycle Speedway Council.

The inner perimeter of a cycle speedway track is about 65 till max 100 meters. The starting gate is of the same structure as on a motorcycle speedway gate. The track must have a width between 5 and 6,5  meters. The track surface shall be of an approved substance. A loose dressing when used must not exceed 25 mm (1” )  depth and a certain banking is allowed.

Big difference with BMX is that team-racing and competition is an important item. A team must consist of 8 riders. A race holds 4 riders, 2 riders of the home team and 2 riders of the quest team, riding 4 laps. This means the distance to cover is about the same as racing on a BMX track (350/400 meters ). Junior competition of riders under 18 and Senior competition of riders 18 and over. Ages are mainly between 12 and 30 years of age in this sport. Speedway bicycles don’t have brakes, mud-guards, rat-trap or all metal pedals, toe clips or straps, lamp brackets, wing-nuts, any form of gears or any other fitting considered dangerous. Handlebars shall not exceed 30” ( 75 cm ) in width. Special super light frames and parts are mounted and 26” wheels are used. Riders in a team must be uniformly dressed and must be covered from the neck down. Nowadays a riders must wear a helmet (wasn’t so in the early days) and gloves must be worn.

In the 1980’s there were over 50 events from May till September and over 200 clubs in England alone. Besides Great Britain and Holland, Australia has been very strong in Cycle Speedway. During the European Challenge Cup event in 1990 at Ponypark Slagharen - Holland, we had this Hilversum cycle speedway club giving several demonstrations with their riders.

First ever Cycle Speedway event in the USA

Latest news I received in September 2002 from Johan Koudijs, one of the three men who organized the demonstration at Slagharen (Ton van Haren and Gert Veer where the other 2 men) was the following and..... it was HOT news I believe! Johan Koudijs told me that he just has come back from a trip to the USA, to be present at the first ever Cycle Speedway event in the USA. It concerned an Anglo-American competition between USA and Great Britain riders. Johan was invited by the British delegation to be present at this event.

The competition took place in Edenton - North Carolina and the local organization made it a big happening. Many TV appearances were part of this event, explaining all about Cycle Speedway during interviews. John made a lot of friends and ofcourse the races took place. Final result of this team competition was that Great Britain did beat USA with 113 - 67 points. In fact the final result wasn’t that important. More important was the fact that nobody knew Cycle Speedway existed in the USA and now everybody knows. This is a good way to promote Cycle Speedway and make it more popular worldwide.

The main difference between Cycle Speedway in the USA and in Europe and Australia are the bicycles used. In the USA mainly adjusted BMX bikes (cruisers 24” or 26”) are used and the tracks itself are somewhat longer than the European/Australian tracks. The Americans however are going to adjust their tracks and bicycles to the official standards and train very hard to be able to sent a good team to the 2003 Cycle Speedway World Championships, a two round series to be held in Rawicz (Poland) and Manchester (England).
Any of you USA BMX guys interested in joining the Cycle Speedway ranks?

Anyway, Johan Koudijs of the Cycle Speedway Racing Almere - Holland and his men are now preparing the European Club Championships which will be held in city of Almere (about 30 minutes by car from Amsterdam) in May 2003. This might also be an opportunity for Dutch BMX’ers to try Cycle Speedway and maybe qualify for this European Club Championship 2003.

Story by Gerrit Does.

Just to give you an impression of what now-a-days Cycle speedway means, here a story on Chris Timms, a 17 year old National champion in 2008.

CHRIS Timms looks like being a chip off the old block. At 17-years-old, he has been crowned cycle speedway’s British Under-19 champion. He becomes Birmingham Monarchs Cycle Speedway Club’s first national champion for 20 years. Chris, has all the ingredients to enjoy further success, especially as his father, Paul, also competes for the Monarchs – at the ripe old age of 51. The pair of them often ride together in a demanding sport, which takes no prisoners.

Proud Paul has no doubts about his son’s prospects in the sport and said: “I hate to admit it, but he’s better than me – although I have beaten him on the odd occasion. “He’s incredibly competitive and a much more aggressive rider than me. I’m too much of a gentleman at times. “However, we rarely race against each other, even though we’re in the same heat.’’

The Great Barr rider added: “It’s very much like normal speedway where tactics come into play. Sometimes we have a chat before we go to the line. Chris might get to the front and then let me go ahead round the outside. Other times I try to shield him from the other riders. “It does get very physical at times and there can be some spectacular spills. “I’ve broken about five bones so far and you can get some very nasty grazes.”

Paul took up cycle speedway when he was 17 years old, but then went on to motor-cycle racing for the best part of 20 years and did not get back into cycle speedway until 12 years ago. He added: “I didn’t even know cycle speedway existed until a friend took me down to Perry Hall Playing Fields in Perry Barr, where our home track is situated. I knew right away it was a sport for me. When Chris was younger he used to come to the meetings with me, so I suppose he was always destined to be a cycle speedway rider. Two wheels have been my life and I couldn’t live without it. I think it’s in the blood.” That’s hardly surprising since Paul's dad Brian rode for both Wolverhampton and Cradley at speedway.

And Paul shows no signs of slowing up. He said: “I don’t do any special training as such apart from cycling to work and going out on the mountain bike occasionally. “We train twice a week during the season and that’s usually enough.  “I’m thrilled to bits that Chris has become British champion – it’s something I would have liked to achieve – but there’s always veterans’ competitions. “Believe it or not, there are over-50 races, which are known as super-vets.  “And there’s even grand vets as well, which are over 60.  “I’ve done four veterans’ events so far. I won the first one, had two thirds and I also finished third in the British vets.”  Paul adds: “Even though I’ve been involved in cycle speedway for so long, it still gives me a glow when Chris and myself go to the start line together. And when we finish first and second, it’s a great feeling.

Here this video on Cycle Speedway in Australia, year 1988. Check it out

August 16th. 1982,  we received a letter from the Cycle Speedway Council.

Here the letter we received Graham Sutton, the Secretary of the I.C.S.F.  The contense speaks for itself. Years later during one of the E.C.C. events at Ponypark Slagharen (NED), we realized a demonstration organized by the Dutch Speedway Cycling organisation. In the end not much came out of this action, I am sorry to say. 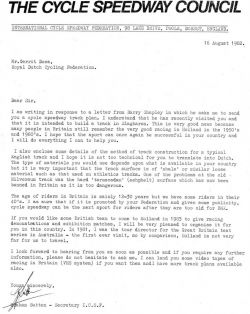