"A sport with no history has no future!"

When I did read this slogan ending 1999, I thought there is a truth in that and something must be done about it when it concerns BMX, because there is no such thing as a recorded general European or even world wide history in headlines available to BMX'ers.

The history of BMX (as I know it).

Since a couple of years I also had the idea of writing another book about the History of BMX in general and more specific about the History of European BMX. I wanted to do something different and unique by writing about the history of our sport from the '50 s on, talk about old skool stuff and honor our pioneer BMX heroes in order to have it all documented and secure that with this history our sport does have a future! The idea of writing a book changed into starting a website on this topic instead.

I could not make the time for it at first, but since I stepped back from BMX in 1999 as an active organizer and team manager, I came to the conclusion that I had a lot of free time left from then on. So, early 2000 I started to collect all my notes, pictures, video's, correspondence and other stuff that I gathered since 1974 and made a beginning, writing down this history as I know it. Up till this day, now and then I did add stories and pictures to this site. Since I am a pensionado (early 2010) I started to update the site more often. Still plenty of stories to tell and for sure hundreds of picture to add.

The start of an ambitious project.

As General Secretary of I.BMX.F. I was active from 1981 till 1985, I had a lot of contacts world wide and I found out in 1999, that I am probably the only one (together with my friend Louis Vrijdag) with specific and detailed "on file" information on the early developments of the sport in Europe and even in the World.

In order to get as much information as possible, I did ask the former I.BMX.F. offices in Canada, Australia and at present the UCI office in Switzerland for information on the first 20 years of BMX. I had to find out that they were not able to help me at all. Files were lost, probably during change of offices from Holland, to Canada, to Australia and finally to Switzerland. So, I had to use my own files and know-how to start this project.

University of BMX on the internet.

Then I thought, why write a book while we do have this great medium "the internet". Lets put it all on the WorldWideWeb, then all those interested will have a change to read it and maybe even learn from it. Since 2000 I was already able to publish, "the History of European BMX" on FATBMX.com, a Dutch BMX website set up by my good friends and pioneer / Old Skool BMX'ers, Bart and Paul de Jong (The Young Ones).

I do have about loads of documentation and photo-albums from 1974 up and till today. Most of the documentation concerns the years up and till 1999. With this all comes an archive of about 100 specific video-tapes of European - World Championships (JAG, I.BMX.F., FIAC-I.BMX.F. and UCI) as well as European Challenge cup events, AVRO - TV series events and about 50.000 pictures taken all over the world during those years and a lot of great stories which I hope to tell you in the future through my personal website the University of BMX (www.universityofbmx.com).

Furthermore I do have many issues of BMX Action, BMX Plus, Total BMX etc., as well as several publications of different European BMX magazines that even don't exist anymore today. A lot of interesting old stuff in their too. Beside the history, I think I have a lot of experiences to share with you all, that might be interesting reading.

Dedication of this site. 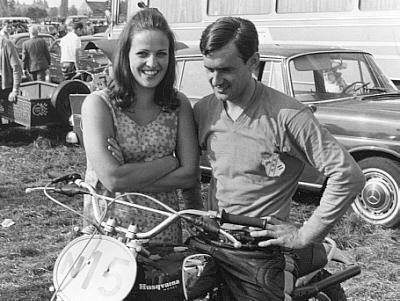 In my opinion this website, the University of BMX, is different from all other BMX sites that I know of, because it is unique and very personal. It's therefore and other reasons, that I want to dedicate this site to a unique and special person in my life, ..... Mieke, my wife.

It was in 2014 that I had been in BMX for 40 years. Before that I was heavily involved in moto-cross for about 14 years (1963 - 1977) and all that time my wife Mieke, supported me where ever she could. Many weekends she had to stay home alone, while we (my youngest brother in law Toon Karsmakers and me) traveled all over Europe taking part in Moto-cross Grand Prix events. Also the time training and preparing the motorcycles during the week, took away a lot of time from my family.

Later on we had international moto-cross riders stay at our house and when I got involved in BMX, many American BMX racers were our guests, like Perry Kramer and David Clinton, John Hutelin, R.L. Osborn, Mike Buff, Scot Breithaupt, Kerinsky Bullard, Jamie Burrows, David Argyle, Jeff Devido, Greg Esser, Tony Szanaka, Bill Grad and Todd Lyons, just to mention a few. It was never a problem for her having all those quests over at our house.

In the early days of BMX (1978-1980) here in Holland, at least 3 evenings a week I was away from home, promoting BMX in Holland, lecture, advice clubs and so on. Mieke had to deal with all that too. Why do I tell you all this? Well, normally when writing a book, one dedicates that book to somebody. Out of respect for my wife Mieke, coping with all this during these years, me being involved in sports in general, spending a lot of time outside the country and away from home, I want to dedicate this website to her. This one is for you MIEKE. Thanks for all the support and understanding during more then 50 years now. You're the best!

To all you readers out there, READ ON & ENJOY!