Details
Written by Gerrit Does

1975 - The NBL - National Bicycle League (USA) of George Esser, now holding around 284 members, separated from the NML and went its own way!

As motorcycle enthusiast, I had a subscription on an English newspaper called MOTOR CYCLE NEWS. In its July 16th. issue I found an article on (as they called it at that time) MOTO BIKING.

Mitsui's bicycle division of England, were busy importing a so-called YAMAHA MotoBike (BMX). Mr. Mick Robbins of Mitsui stated that "the machine" would be definitely for sale before Christmas that year. Retail price for this complete bike ..... 100 pounds Sterling!!!!

Mr. Robbins stated that in the USA this new sport was really catching on and could have a good future in England and Europe as well. Bikes would become available anyway ending 1975.

By the way - It was also in this year that I organized a "riders exchange" program for moto-cross riders in co-operation with Mr. Ed Bondurant (from Kansas City). During 1975 and 1976 about 10 Dutch top moto-cross riders competed in the USA. In return about 8 USA riders were places in quest-houses here Holland and raced the national MX series.

Among them also a lady moto-cross rider by the name of Nancy Payne. I organized a Maico sponsorship dear for her in the 125cc class and together with her boyfriend, she stayed for a short period of time in my house and later on in another quest-house.

Sometime 1975, my oldest son Nico Does (5 + year old at the time) riding his street bike at the parking lot of the Karsmakers coach-work factory in Aalst-Waalre, Holland. So you know were the idea came from to start with BMX in Holland. 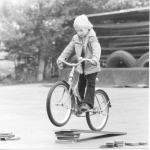 In 1976 I visited my brother in law Pierre Karsmakers in Laguna Beach.

I came over for moto-cross, training with Pierre among others at Saddleback Park. Both Pierre and I also went around in L.A. and visited a lot of companies involved in BMX. We went to Mongoose, Webco Inc., Laguna BMX, Kuwahara, RedLine, Oakley and so on. We stayed at Kent Combs' house (a doctor/specialist eye, noose and throat). We also had a look at the Irvine BMX track, we went to an evening BMX race organized by Ernie Alexander at Van Nuys and to an offcial event at the Elks BMX track in LA. All of this to get orientated, gather information on how to set up a bmx event, making new contacts, set up a network in order to start a BMX organization in Holland and help out in other Europe countries starting to organize BMX (that happend in 1978 and 1979).

First BMX bikes imported by Pierre Karsmakers in that same year. My son Nico Does, 6 years old at the time, received on his birthday (April 2nd. 1976) his first official BMX bike in Europe (continent). In Waalre - Holland the first group of BMX'ers was formed, due to the activities by Pierre Karsmakers. Seen here in the woods around Waalre fltr. Nico Does (6 y.o.), Pieter Does (2 1/2 y.o.) Mark Wiebrands and Ludy v.d. Werff (r.i.p.)

1977 - In May of this year the first BMX race in Australia took place,

according to BMX riders Alistair "The Professor" Johnson and Jeff Keen. Under the initial guidance of Steve Meadows, the racing grew to the point where 80 till 90 riders were turning up each week. However, business pressure forced the withdrawal of Steve and his followers. Aussie BMX was rescued from the trash by the newly formed Ryde-Eastwood BMX Club. All of this took place in and around the Sydney area. It was this organization that formed the initial backbone of BMX in Australia.

First contacts with the NBL - USA.

It was only in this year that I had my first official contacts with the NBL - Florida. I asked the NBL for information and they did sent me an info-kit. The name to remember for me was that of Mr. George E. Esser, with whom I became very close friends during the years to come.

In this year the ABA - American Bicycle Association was created. As the ABA stated: by 1977, pockets of loosely organized BMX races dotted the Nation from coast to coast. It was time for a national sanctioning body and from out of this need the ABA was formed. Mr. Merl Menninga was its first president.

did see the light of day in 1977. Bob Osborn was THE man. BMX Action was a trend setting magazine for a very long time! In August of 1977 BMX Action made an inventory on what sanctioning bodies (8) there were in the USA. He came up with the following bodies:

A special story here. Picture on left, John Palfreyman and Doug Takahasi racing BMX sidehacks from 1972 till 1976. Then John changed to motorcycle moto-cross sidehacks, came to Europe and picture shown on the right does show us John Palfreyman and Thom Lund both former BMX'ers, now competing in the European MX sidecar Championships in 1979. As you can see, this team is sponsored by HEUGA Tapijt, a Dutch company producing and selling floor carpet in tiles. The owners, the van Heugten family,  had 8 sons racing in MX events, solo and side-car classes. Ton van Heugten has been a World Champion in this sidecar class. The van Heugten family was very close with the Karsmakers family at the time, who had 5 brothers racing motorcycle moto-cross events.