Because of the fact that there was a pilot-project event going on in Orlando this yeat, the UCI BMX WORLD CUP In Olando - Florida, the University of BMX did have one of its largest number of participants on this trip. Our group consisted of 37 persons. Most of us travelled together and a8 of ushad their own travel schedule or were in the USA already and joining us in Olrando.

This time we stayed at the Holiday Inn, Express, West Colonial Drive in Orlando.We had scheduled 6 days of training, some sight-seeing and shopping. Ofourse, as in previous years, the European Team organised togther with the Orlando Fairgrpounds BMX and the Orlando Parents Council already the 4th European University of BMX Training Camp for local Orlando riders, Around 70 riders took part in this training camp. After the trainng camp for these local riders, an Evening Ribbon Race was run by the Orlando organisation.

The group left Orlando for Columbus on December 24th. We went from around 20 degrees Celcius to about 14 degrees below zero Celcius. We had our Christmas Dinner as every year, on December 25th. It was again a special arrangement exclusively for our group, at the Hyatt Regency Hotel. Again, December 30th we left Columbus for Europe.

This University of BMX European team consisted of 37 members. They were:

To give you an idea about to cost involved here some details: in totaal Dutch florins 63.000,= was spent on this trip by our teammembers. This included: airflight tickets,rent for 4 Vans we used in Orlando, fee for our transportation from and to airport in Columbus (a bus/coach), hotelaccomodation in Orlando ánd Columbus, fee for using the Orlando BMX track, expenses souvenir T-shirts, licenses NBL and entry-fees Xmas Classic. Besides these expenses, members had to pay for their own food and drinks as well astickets for Universal, Disney, Sea World and so on. Our transportationto and from Columbus airport and our hotel was, as the years before, done by Adventure Tours, inc. from Columbus-Ohio.

This trip was an exiting trip, specially for our friends from the Czech Republic. Karel Marak did not like the food too much. After a dinner he was hungry again within 2 hours. In CZ having a good diner means you can last almost another day. He called it: it looks like we are eating "air" (lol).

During our stay in Orlando, my dear friend George E. Esser, founder of the NBL in 1974 and co-original founder of the I.BMX.F. in 1981, visited with me in Orlando. Part of our group did visit the UGP ware-house of Ron Bonner, where all of us received a souvenir T-shirt from Ron (shown below). George Esser came with us to the ware-house and being there he did not feel very well.He had the feeling he was going to pass out. I did bring George back to the hotel and we drank some coffee. Still not feeling well, I did bring George to a nearby hospital, about 2 miles from our hotel. After about 2 hours of waiting and testing, I was told Geroge had to stay overnight. Greg and Brian Esser were warned and they came over the next day to pick George up and bring him home. It seemed George had a small stroke.

Seen here, the official 1995 University of BMX T-shirt and the souvenir T-shirt handed out to us by Ron Bonner of UGP.

The pilot Project "the UCI BMX World Cup" which took place at the indoor facilties of the Convention Center in the Hyatt Recemgy Hotel and in which organisation I was acting as project-manager for the UCI,went kind of o.k. Although the USA riders had some difficulty adjusting tothe time qualifying system. It was something new for sure, they had to get used to the use of transponders. AS project manger of the UCI World Cup events I was responsable for the timing and registration system of AMB. We had to care that equipement in a large large aluminum case and needed special documents to import and export that equipment in and out of the USA.

During the Christmas Classic events Dutch rider Dennis Wissink got hurt and I had to go to hospital with him. Ofcourse I went together and we did spent (again, like years before when I was at a hospital with Christophe Leveque) about 2 ½ hours at that hospital. We missed most of the racing on Day II. Dennis came out with a broken collarbone, which afterwards seemed to be a dis-location of the "ac joint". Later on, an operation was needed in Holland. All is o.k. by now.

Seen here a serie of pictures taken during the BMX clinic Orlando for local riders. The riders present to take part in this BMC clinic were devided in smaal groups of about8 till10 riders max, The track was devided in sections: start - first straight including first corner - technical section 1 - technical section 2 - cornering last corner - rythem section last straight and sprint last 40 meters including finishing.

As in precious years, we also visited Universal Studios and Disney World in Orlando. Extra for some of our group was Seaworld.

Then we left for Columbus - Ohio on December 24th. at 8.00 hours. We flew through Cincinnati and arrived in Columbus at 11.43 hours. Our transportation was waiting and this bus brought us to the Hyatt Regency Hotel.

As said earlier, the Hotel management arranged diner for us again on Christmas eve, as done in previous years. This was appreciated very much by all of us. Here some pictures of our groupmembers having diner together. 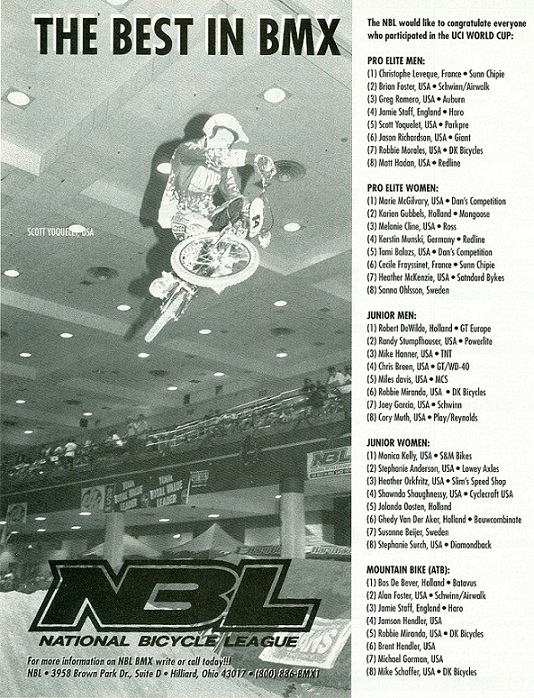 Christmas Classic results of those classes were European wereracing in and were succesfull:

After the event ofcourse a drink was possible and the next day we all had to be ready early to leave for the airport and fly back to Europe again. We left the Hyat Regency at aaround 9.00 hours and after check in, the nplane left at 12.45 hours direction Atlanto and thenSchiphol - Amsterdam onDecember30th., to arrive in Holland on December31st. 1995 at about 7.15 hours.

Another nice trip was over which we all enjoyed very much. END OF STORY.