University of BMX trip to the greatest race on earth, the ABA Grand National presented by Odessy & ATi.

Since my first trip to the ABA Grands in 1992, I became enthousiastic about this event. Kind of different from the NBL events like the Christmas Classic and worth while experiencing it again. So I decided to set up another trip to the biggest event of the year world wide. Although November still is a difficult month since schools were still on, no vacation, 14 riders managed to join the group travelling to the USA. The University of BMX (by me!) organized the trip, accomodation, transportation, registration and so on, as done in previous trips tot he USA. Our Airliner was United Airlines on the flight wnet from Amsterdam - Washington DC - Chicago to Oklahoma City. Our group stayed at the Meridian Plaza Hotel in Oklahoma City.

Since the I.BMX.F/FIAC Worlds 1994 would take place in the USA at Waterford organized by the NBL, the ABA wanted to organize their Worlds kind of close by, one week before the Waterford event. They asked me to help them out with addresses of National BMX organisation from Europe and I did. I did give Clayton John a list of all European BMX organisations.

The overall budget spent for this trip by those 15 persons was Dutch florins 19.500,=. About 15.000 on tickets, 3000 on hotelaccomodation (7 nights, 5 rooms), around 800 on Transportation (Cargo Van) and around 250 on fee Thanksgiving diner/Hall of Fame. On picture below, groupmembers ready to leave for the USA: Schiphol airport - Amsterdam. All mentioned above are in picture, except Evert Greis, Dale Holmes and myself. We arrrived in Oklahoma City on November 22nd at around 20.15 hours.

After arriving safe and sound on November 22nd., the next day we made ofcourse a group picture in front of our hotel in Oklahoma City, USA. Mr. Gary Ellis Sr. of Adventure Travel, did make arrangement for our hotelaccomodation and stransportation. We stayed at the Meridian Plaze Hotel on South Meridian in Oklahoma City, about 20 minutes from the ABA event. As transportation we used a Cargo Van.

Ofcourse we all wanted to check out the track a.s.a.p. So we travelled to the Myriad Convention Center in Oklahoma City on November 23rd, were we saw that the track was being built. ON top of starting hill fltr.:
Urs Kropf (SUI), Daniel Herz (A), Gerhard Meijer (GER), Mario Penn (A), Dale Holmes (GBR), Rob Bulten (NED), Bas de Bever (NED), Yannick Rosset (SUI), Ken Meland and Thor-Arne Dybdahl, Pieter Does and Marino Fuente. ( not in picture here Wolle Meijer, Evert Greis and Gerrit Does).

Here a picture of the ABA Grands BMX track being ready abd in use. Personaly I liked the accomodation very much. It looked a little bit like the Bercy-Paris indoor in France from a couple of years before. 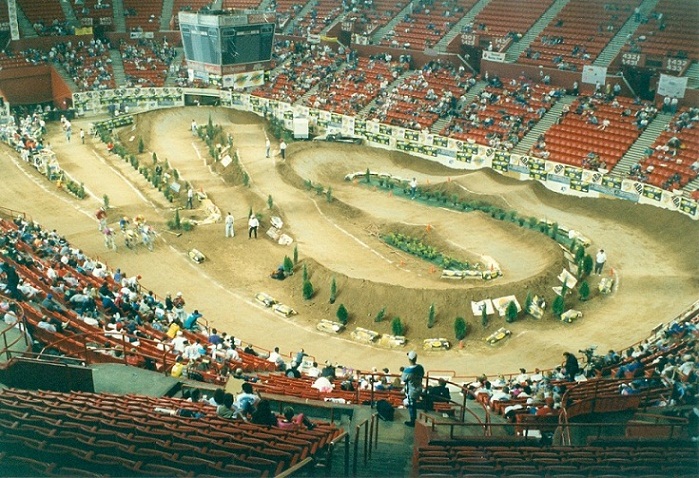 On November 25th. it was time to practice. We arrived at the Convention Center after an about 20 minutes drive with the Cargo Van. As you can see it was busy on the starting hill and in the hall with a Vendors row, seen here wheel building specialist and good friend of mine from the early days (in Florida) John Kovachi and his stand.

Actual racing started on Friday November 26th. Gates open at the Convention Center at 6.00 hours. Events run were the Race of Champions, Grandnationals, ABA Pro Supercup and East versus West. Racing went on on Saturday and Sunday November 27 trh 28th. 1993.

We also visited the ABA BMX Museum. I also did find the Yamaha full suspension BMX bike that I saw myself for the first time in 1974 when I visited the USA and conducted moto-cross training clinics in Kansas City. I did see that bike at a Yamaha motorcycle dealer.

This picture show a WEBCO BMX bike, made in the USA. After WEBCO stopped producing BMX bikes in the '80 s, former WEBCO factory rider Nico Does (NED) started a company producing and selling WEBCO BMX bikes again. First type was called the WEBCO E-type. WEBCO was the abbreviation for "West European Bicycle COmpany" and E-type stood for "European type".

During the first day of racing I (GD) was in bed at the Hotel, ill. Pieter did win the Race of Champions in Experts 18 & over that day and I wasn't able to watch him race! I was very proud however and glad that after taking medication, I was able to be present the next day and saw all the racing then.

Racing came to an end. We all had a great weekend with a lot of new experiences. Time to prepaire going home. Packing our stuff and having a last diner in the USA that trip. As usual at the airport "order" in putting all our stuff in line to better keep controle. Waiting for our flight to leave and then off to Chicago, Washington Dulles Intern. Airport and to Schiphol - Amsterdam, arriving there early in the morning at 7.20 hours on Tuesday November 30th 1993.

Another great experience came to an end.