Another trip to the USA was planned and scheduled, somewhere in May 1992 preparations started. 24 persons entered the 1992 Clinic of which 2 trainer/coaches and 22 riders from Europe. However, my son Nico had to cancel his trip since he got injuried (did brake his collarbone) just one month prior to this trip. Ending November '92, everybody participating in the 1992 University of BMX December trip to the USA, received (as in previous years '90 and '91), before leaving for the USA, a small booklet wiht detailed info on our trip. Communication is essential to have a succesfull, pleasant and safe trip and stay, overall. A list of members of our group, planning/flightschedule and info-bulletin with advices on these 6 images below:

As I told you, this time the European BMX team consisted finaly of 24 members and we had a different planning then the previous 2 years. We first went to Columbus to take part in the Christmas Classic race.
The next three pages underneath shows you the info that has been handed out to the members of our group.

On our first day is was a day of rest, Christmas day. Relaxing in the hotel lobby are Robet Jacobs, Mark van Leur, Bas de Bever (all NED), our dear friend Robert Indry (GBR., r.i.p.) and Alberto de Jezus (NED). Several of our hotelrooms were on the 7th. or 8th. floor and to the downtown side, as the picture will show you. During the day, out riers were able to put their bikes together in a spcial area next to the hotel, close were also the "closed parc" was. All bicycles had to be stored there. Part of our group had their bikes ready and were hanging out. Fltr., Daniel Herz (A), Tarek Rasouli (GER), Alberto de Jezus (NED), Mario Penn (A), Reinhard Mitterover (A), Mark van Leur (NED), Jochen Beurer (GER) and Evert Greis (GER).

By prepairing this page, I found out that I had only 2 pictures of the Christmas diner, that again was specialy organized for our University of BMX group by the Hyatt Regency. Two tables with only Dutch guys (sorry). left picture, Jacobs, Mulders and Does and at table on right picture, van Leur and Polkamp. During our stay in Columbus there was ofcourse also some time to do some shopping.

Saturday 26th. it was registration and practise time for all and Sunday December 27th., the President's Cup was on, a State Championship only for US riders. As many times before, won the riders from the State of Florida. Monday 28th and Tuesday 20th., were Day I and Day II Christmas Classic events, two days, two seperate races. Pictures below show: A track overview, part of the vendor area with Mr.Homer's shop and our riders getting ready for the riders parade. Names of riders are at the bottum of "opened" pictures. 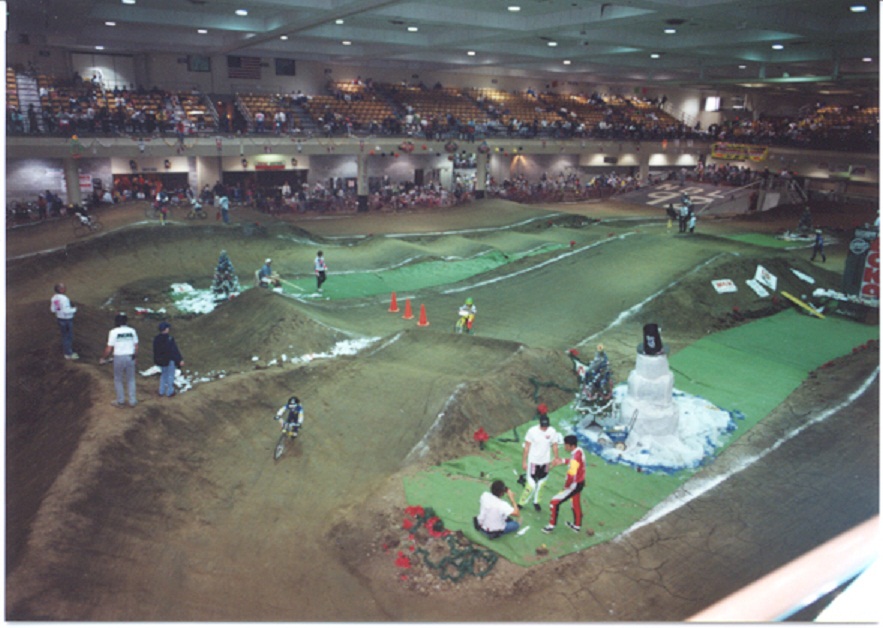 Euro riders getting ready for the parade and race on Day I.

After two days of racing, a fantastic event came to an end. Florida again did win the President's Cup. Here the final results in all individual classes Christmas Classic 1992.

Afterwards the group went to Orlando and Daytona Beach for training. In Columbus we stayed as before, at the Hyatt Regency Hotel. In Orlando we stayed at the Comfort Inn along the West Colonial Drive, about 2 miles from the track. We trained in Orlando at the Parents Council BMX facilities for about 4 days and then we moved to Daytona, were we stayed at the Dessert Inn for 3 days. Mr. Shag Shaughnessy took care of us very well, arranged a special hotelroom price for us at this hotel. We could use the Daytona BMX track to practice on and we also did physical training on the beach (running/interval). Our hotel was right on the beach. Shag Shaughnessy also organized a welcome party at the Dessert Inn, in honor of the Europeans. Great stuff!

Leaving for Orlando, waiting to board our plane. This flight wasn't very comfortable and our bike boxes and suite cases just got on this small plane!

We arrived safe and sound at Orlando International Airport. Same as the years before, Mr. Beeler with his Van and trailer picked us up again and after we got our 3 Chrysler Voyagers through Budget Rentals, we could travel to our hotel, this time again the Comfort Inn, situated along West Colonial Drive in Orlando, close to the Parents Council BMX track, operated by mr. Art Beeler. Appointed drivers in the Vans were Gerhard Meijer, Alberto de Jezus and Gerrit Does. Her some picture of a hotel room and training clinics, just to give you an impression.

Ofcourse in the evenings we went out and had diner. Here a picture taken during one of those diners at Red Lobster (all were eating meat!). Besides Universal Studios, we also went to Disney World in Orlando. This trip we celebrated New Year in Orlando.

While in Orlando, we trained 2 times per 2 around 2 hours per training and most of the teammembers took part in a so/called Ribbon race and in a Trophy race, both helt in teh evening. On Monday January 4th. 1993 we left Orlando for Daytona Beach. Mr. Shag Shaughnessy helped us out transpsoring our bikes and suitecases. He come over to our hotel in Orlando with a Van and trailer. We stayed in the Dessert Inn Hotel, a former maffia hotel from the 50´s. The hotel did not have any straight lines, police could not shoot (straight) very well because of that !!! Check out the sign at the hotel entrance .....

Shag Shaughnessy surprised us all very much by organizing a Welcomes party and diner. Besides our group, friends and family of Shag were present as well. We all enjoyed ánd appreciated this welcome very much.

January 4th (1993) we did have our first training session at the Daytona Beach BMX track from 15.30 till 18.00 hours. Before training we had to get all the plastic off the track (plastic to prefent wash-outs when it rained). We trained "sections" of the track and started with gate-practise. After a good training session everybody was very hungry, so .... off to have diner.

Shag also invited us during our stay to his house and we all spent the evening there talking about ....... BMX!

We also did have some interval training on the beach of Daytona, just behind our Hotel. Exercises in pairs and interval running. Of course Daytona Speedway was visited and in their museum even the name of my brother in law Pierre Karsmakers showed up as one of the winners of the famous Daytona Speedway moto-cross in the mid '70 s. This time we could not pass out Cape Kennedy. We all went their and were impressed by what we saw. During our stay in the USA, each year most of the riders did buy a lot of BMX stuff, that one could not buy in Europe. Daniel Herz broke a record: he bought 2 BMX bikes and one complete mountain bike, which a took apart completely. He was able to get all of that in 2 bike boxes, but they were about impossible to carry, too heavy. He was lucky: because we were a large group, we had a total weight we could could carry. I wondered what customs in Austria would say about this load of parts. He did not have to pay for freight. Later on we heard that Daniel was left alone by the customs department too in Austria.

Another University of BMX trip to the USA came to an end. On Saturday January 9th. 1993 we left Daytona Beach to travel to Orlando Airport, turned in our rental cars and left for Schiphol - Amsterdam airport at 10.55 that day. We arrived in Holland on Sunday January 10th. and from there on flights left for Sweden and Austria. Again another great experience for sportsmen travelling with us was over.