The University of BMX co-organized the trip to the 15th. ABA Grands in Oklahoma City - OK, USA

Period November 24th through 30th 1992, the Greatest Race on Earth. 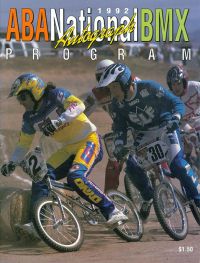 About 1 month before the scheduled University of BMX trip to the NBL's Christmas Classic in December 1992, the GT EURO Team was invited by GT Bicycles USA, mr. Richard Long, to be present and take part in the greatest race on earth, the ABA GRANDS in Oklahoma City - Oklahoma, USA. We did meet up with the WEBCO BMX Teammembers already present in the USA, in Oklahoma City.

Reason for this invitation by GT Bicycles USA was the fact that GT formed a World Team during the I.BMX.F. World Championships in Salvador, Brasil on 7 - 9th of August 1992 and they won the I.BMX.F. Manufacturer Team World title 1992 there.

On Thursday November 26th. the annual ABA Hall of Fame Induction Ceremony and Thanksgiving Dinner took place at the President's room of the Myriad Convention Center. Our group was present and had diner there.

On Friday November 27th. was the day op the Race of Champions. This was a race were the top 10% of all States were allowed to race and this race was also open to all foreigners.

On Saturday and Sunday November 28 & 29th. the ABA national titles will be decided at this 15th edition of the greatest race on earth. During one of the qualifiers of Pro-class, Nico Does was run into a wall and broke his collarbone. Richard Long's son did bring Nico and myself to a hospital close by and we both spent another 2 ½ hours there before we could go back. All of this happend on Saturday, so Nico had to sitt this one out during the rest of the day and Sunday as well. This was also the moment Nico decided to stop racing, he did not want to get hurt again. From then on he concentrated himself 100% on WEBCO Bicycles, which he owned at the time.

Pictures above: Group getting ready to leave from our hotel to the Convention Center. Our transportation was a large Van.

Pictures above: Breakfast on our way to the Convention Center and photo session by GT Bicycles Inc. 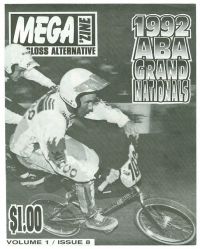 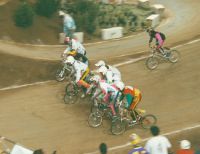 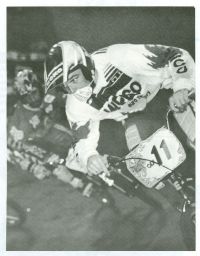 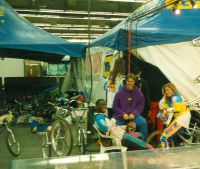 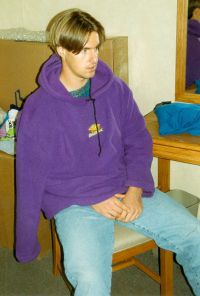 Pictures above: B.J. Gant, Nico and Corine socializing in between moto's: GT promo being made, Mike Miranda with Gary Ellis and Chad Herneaz: Nico in hotelroom after returning from hospital and announcing his retirement. 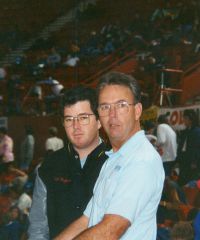 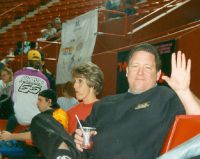 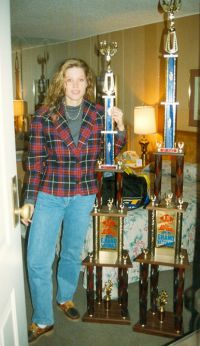 Pictures above: Two important men at GT at the time; commercial man Todd Huffman (T1) and on right GT USA team "teammanger" Bill Nelson: my dear friend and MAIN MAN at GT BICYCLES Inc., Richard Long (r.i.p.) and his wife at the Grands in Oklahoma: Corine Dorland showing off her 2 trophies won at these 15th ABA Grands in 1992.

After racing was over

After the competition a special dinner party was organized by Richard Long and all GT, Robinson and Auburn factory team riders and parents/ friends were invited and present. Also the WEBCO teamamebers were invited and present. There so many people joining that Richard made reservations at a Pizza restaurant. This restaurant was exclusive for this group. Before having diner, Richard did speak some words to all teammembers present. Check out the pictures below. 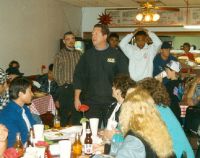 Last but not least, here the front cover of the ABA Magazine "BMX'er" showing Nico Does (in WEBCO outfit) in action before his unlucky crash. 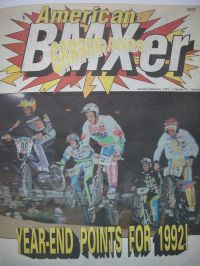 END OF THIS REPORT