During our stay in the USA, period December 15th through 31st. 1990, arriving at Schiphol - Amsterdam airport on January 1st. 1991.
The first time one does something new and challenging will be remembered very well by all those involved. It sure did with all European team members that came with me to the USA for the first time in 1990. I did start with my preparations for these trips sometime May 1990, in order to be ready to go to Orlando-Florida for our training camp and later to Columbus-Ohio to take part in the NBL Christmas Classic events in December.

Preparation for such kind of event is essential. So, before we left everything had to be 100% right, confirmed and so on. Flights were booked in time, transportation in Orlando (rental cars, Mr. Beeler for pick up at airport) and Columbus (a charter bus, holding at least 24 persons + bike boxes and suite-cases). Hotelaccomodations had to be confirmed as well as insurance for our training clinic, use of the Orlando BMX track, entry fees and entry forms for the Xmas Classic had to be at the NBL before arrival of our group and so on .....

About 14 days before leaving Europe, all members of our group received a booklet of about 24 pages with all nessecary info and details on flights, hotels, daily planning of activities in Orlando, roomsharing schedule, in short ..... everything was planned, scheduled, organized. Being well informed and asking for discipline was very important to have a successfull and pleasant travel and stay in the USA. Seen below a couple of pages from that information bulletin: 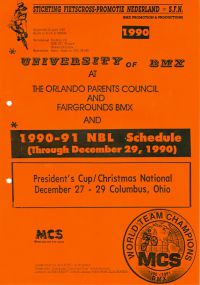 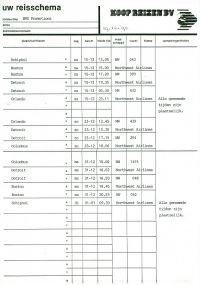 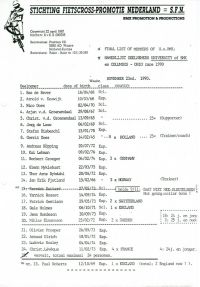 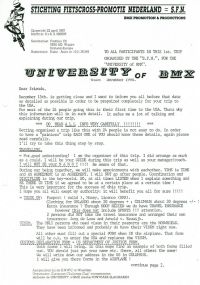 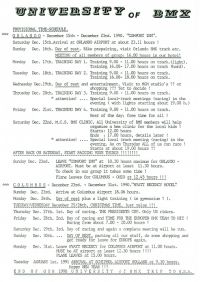 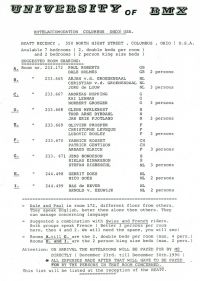 Our group was 24 people strong with Europe's best in BMX. In the 1970's I organized this kind of trips and training camps to the USA with moto-cross riders. With the experience gained then, I organized these trip which were arranged in detail, like: flight, transportation in the USA (mini-vans in Orlando and a coach in Columbus), hotel accommodation, special membership of NBL (incl. insurance) and registration for the Christmas Classic, insurance, Univofbmx souvenir T-shirt, pick up from and to airport in Orlando, organized use of the Orlando Parents Council BMX track with Mr. Beeler and so on. 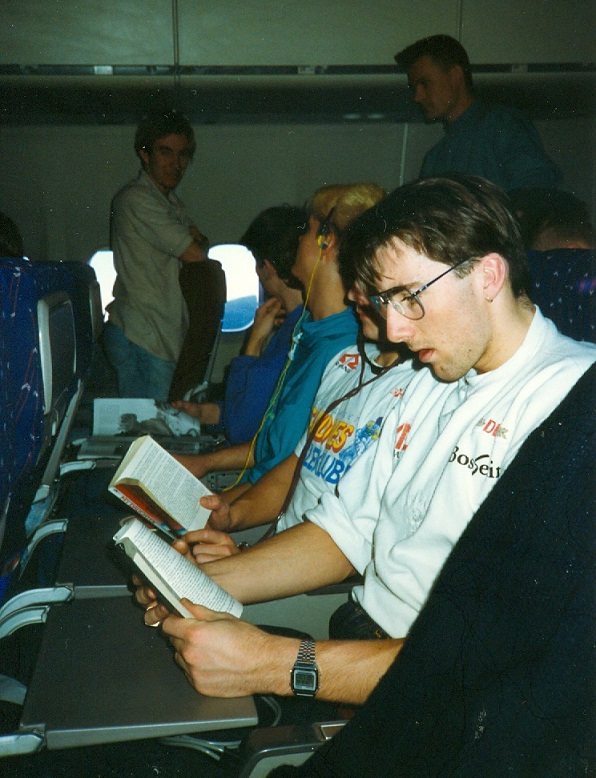 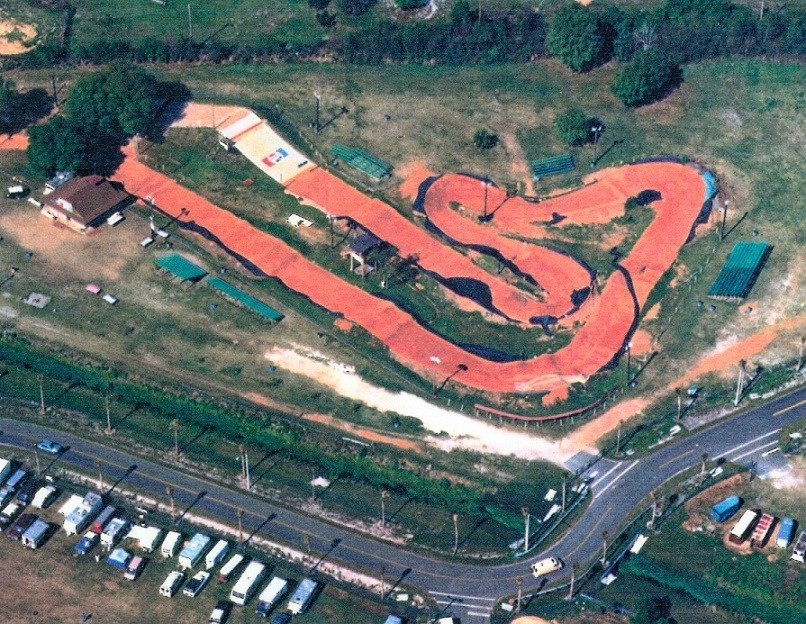 I acted as manager/coach and informed everybody about the way of living in the USA, what to watch for, how to behave and what could be expected over there. Everybody received, before leaving for the USA, a set of detailed information on paper, including the day by day planning and personal advises. Total budget for this happening was about 46.000,= Dutch Guilders.

The Univofbmx European Team members 1990 were:

Scheduled were 6 days of training at the well-know Orlando Parents Coucil BMX track about, 15 minutes away from Universal Studio's and about 30 minutes from Disney World. Track operator Mr. Art Beeler (r.i.p.) was so kind to pick us all up from the airport with his truck and trailer and brought our group to the hotel, close to the track. During our stay in Orlando, my good friend Greg Esser (of FABweld inc. at the time, building among others MCS frames, forks and so on. Greg is a former NBL PRO rider),visited with us and cameall the way from Pompano to Orlando. He stayed overnight and slept in the floor in Nico's hotelroom. I remeber the times that when there was a big event in Florida, several Pro's stayed at Greg Esser's house (or better his fathers house, George Esser's).About 12 till 14 riders sleeping on the floor in their living room,sonothing new for Greg here! 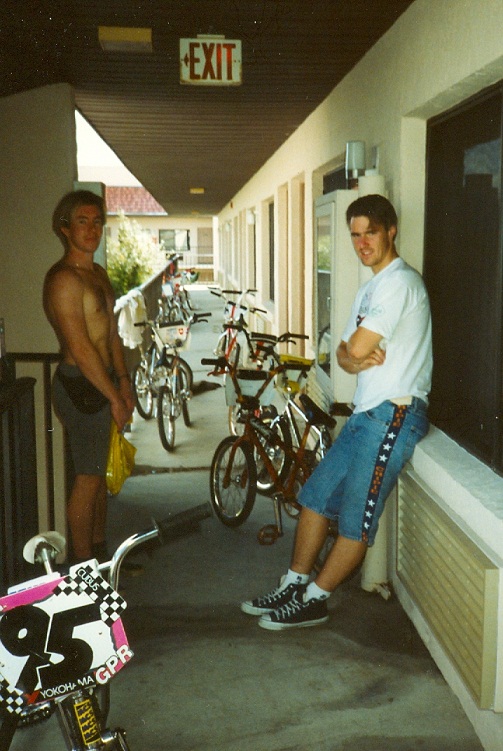 We stayed at the Comfort Inn on West Colonial Drive, on bike about 5 minutes from the Orlando Parent Council BMX track, run by the famous Mr. Art Beeler (organizer 1987 I.BMX.F. Worlds). One day for, some reason, Mr. Spoon (Olivier Prosper) was shut out of his hotel room by his room-mates. The problem was that he was naked, some French were chasing him, he went over a fence and in the street when a police-car passed by. Luckily for Olivier, the police did not see him, otherwise...........

Our schedule was 2 training sessions per day, one on technique and one on physical fitness. Each training took about 2 hours. In between training sessions we went back to the hotel for lunch and a rest. Work and relieve are essential, meaning we also scheduled shopping, entertainment like visits to Universal and/or Disney and so on. Most of the time we did have diner together. Mr. Beeler had arranged some special sponsor deals with Pizza Hut and others. Good stuff! We even scheduled visits to Cape Kennedy and to a Disco in Orlando center. Cape Kennedy we had to cancel, but our visit to Universal Studio's was great. By the way, 1990 also was the year Universal officialy opened. Paul Roberts, one of our English team members, joined some Universal brake-dancers in their act: we all loved that, so did the crowd present during that act. 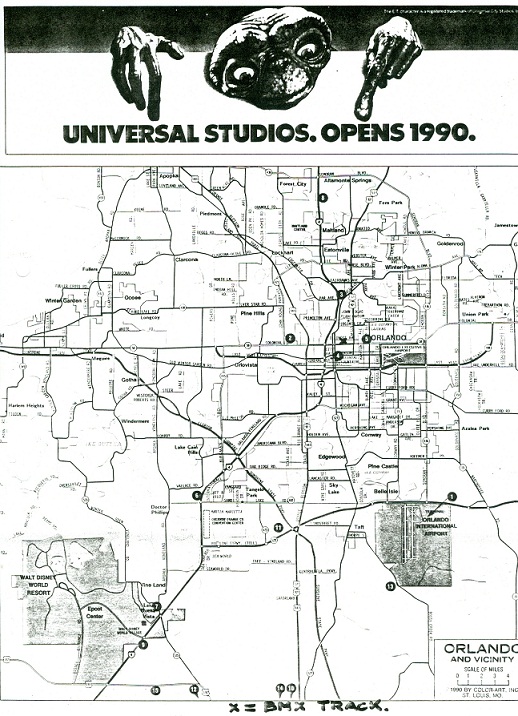 We had an agreement with Mr.Beeler (track operator) to use the track exclusive for the University of BMX group during the day. He also took very good care of us by organising fruit and drinks during our training sessions. Besides that he was able to organise a free diner for everyone of us at a nearby Pizza Hut.

One of the deals with Mr. Beeler was to organize a European style BMX training session for members of the Orlando BMX club and other riders from Florida interested in joining us. About 50 riders showed up and they had a great time with all those famous Europeans!

In the evening a local race took place in which several Europeans took part (if they weren't too tired of training themselves from the days before). Before leaving for Columbus - Ohio, some shopping was done. Several large Mall's in the neighborhood were visited as well as some outlets, a new thing for the Europeans back then.

Mr. Beeler and friends transported us from our hotel to the Orlando airport to leave for Columbus - Ohio. Our riders would participate in the Christmas Classic events. We arrived in time for Christmas eve, however all restaurants were closed even in our very luxurious hotel the Hyatt Regency. I was able however to arrange a diner just for our European group. We had a great time. The accommodation was fantastic. From your hotelroom you could go directly to the indoor hall were the BMX event took place. No need to go outside. Also plenty of possibilities to eat meals in a food center within the same buildings. We all registered during the next day and watched the President's Cup an event for only USA State-teams. Ofcourse Florida, the strongest BMX State, did win.

On day two I did spent about 3 hours in a hospital together with Christophe Leveque. He made a bad fall and had a problem with his ankle. Chris didn't speak any English at the time (look at him now, he lives in the States!) and I helped him out. We both missed a lot of the hot action on Day II. The good thing was, Chris did not brake anything.  The day after the races we left Columbus for Europe. Specially the organization at airports of such a large group of riders with their bike-boxes and other stuff, had to be planned and military organized. We had briefings before we left for and also at the airport itself. Sometimes it was hard to keep these sportsmen and women under control then.

Below in the gallery also a few action pictures. Todd Lyons leading Nico Does and picture number 2, the 8 finalists on the starting gate with Nico Does, Dale Holmes and Bas de Bever. Third picture seen Bas de Bever leading and ND in 4th spot just behind TL.. When "opening' the pictures underneath, the text will be on the pictures.

During our stay in Columbus we were very close to the NBL headoffice, so ..... finaly we had to change to check the NBL office out. Laurie Burnette showed us around. Bas de Bever geing interviewed for TV and a clip from the NBL's magazine Bicycles Today with a picture of almost all European University of BMX class of 1990 members in it.

This has been a great experience for all of those attending the 1st. University of BMX training clinic and Christmas Classic event, Orlando - Columbus / Ohio, USA. We left on December 15th and returned on December 31st 1990, actualy arriving on January 1st. 1991 at Schiphol / Amsterdam airport.

The end of a great adventure!

Check out the full photo gallery: