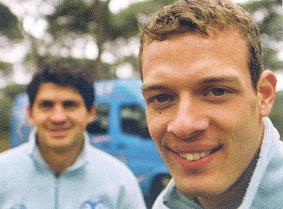 Ending August 2002 I did travel to KARPUN – Austria to be present during the UCI World Championships Mountain bike cross-country, Down hill, 4 X and Trial. Among those present at the exhibition center was ALEXANDER WURZ, the F-1 Racer. Did you know that Alexander is an OLD SKOOL BMX racer? Alexander’s heart still is in cycling. Together with Markus Rainer, Alexander started a professional organized mountain bike team called: the “Lana Bau Rainer-Wurz.com Helly Hansen team”.

Check out their team trailer, ain’t’ it cool!