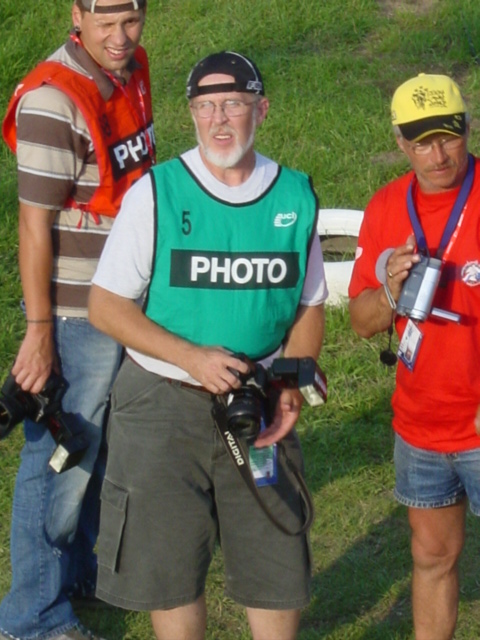 Probably one of the most popular NEWS websites on BMX is BMXMANIA.com. The man in charge there is Mr. Jerry Landrum. For most people outside the USA, Jerry is kind of a mystery man: one can not find any picture of him and many times I have been asked, who is this Jerry Landrum and what does he look like? Well, again at the BMX Worlds in Valkenswaard, I was able to make a sneaky picture of Jerry, when he was working on the infield of the track. Underneath you will find a picture of 3 men: the man on the left is the Bicycles Today editor, in the middle with green shirt is our famous Jerry Landrum and the guy on the right is Frank Sprengers, one of the Dutch World officials and organizer of the first ever Old Skool of BMX Reunion in Luyksgestel  Holland.

Well Jerry, finally the World now can see what you look like, the mystery is solved! From this side we want to give Mr. Jerry Landrum a great compliment with his BMXMANIA.com website, keeping all us BMX freaks up to date of what is happening in the USA and abroad. Keep up the good work Jerry!