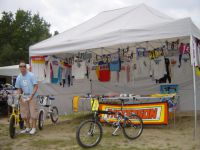 Rainer started riding BMX bikes in 1980 and competed in an official event for the first time in 1982. He was one of the first German BMX'ers to travel with Gerrit Does to events in the USA in the early '80s.

Together with his Dad, Rainer started a BMX shop called "Rainer's Bike Shop". This shop still exists today. Since a couple of years, an Old Skool reunion takes place in Weiterstadt - Germany around September and among others, Rainer is one of the organisers of this event.

As a leading, pioneer racer in the early days his nomination is a form of respect for the pioneer work he did.