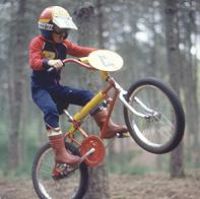 At the age of 6 (1976) Nico was already riding BMX bikes, which his uncle Pierre Karsmakers (former MX Dutch and USA National Champion) imported from the USA in the late '70s.

Officialy Nico was the first license holder in Holland and probably in Europe with an official registrated organisation. At the time his skills were very exceptional. Even in the USA, were he competed at the JAG BMX World Championships in 1979, American riders, among them several Pro's, were astonished by his technic and skills of ND doing one-handers, no-footers and such.

Besides racing, Later on Nico started his own company building and selling BMX bikes. He started WEBCO Bicycles in 1991. Up till this day (ending 2001) Nico is involved in building these bikes and selling them.

KD Quality Products AG, owned by Albert Knill in Switzerland, works with Nico on this. (KD stands for, Knill Does).

Besides all of this Nico still is actif as a trainer/coach on local level with his club "F.C.C. Lion d'Or" in Valkenswaard - Holland, on National level with the KNWU regional training sessions and at International level, when invited to give training/seminars and so on.

More then 25 years he has been involved in the sport of BMX and still lives the sport a loves. Nico never won a European or World title, did win several Dutch national titles and 2 third places at World Championships (Indianapolis-USA and Brisbane-Australia) but for sure deserves his place in the European BMX Hall of Fame as BMX racer/promoter of the absolute "first hour of the sport".

More information on Nico can be found in his University of BMX Advisor CV.