Xavier started racing BMX early 1979 and can be considered one of the pioneer BMX racers of France and leaded the way for a long period of time.

He never won a European and/or World title in the highest level class, however he still was a leading figure in International BMX for many years, together with Claude Vuillemot and David Kastler. 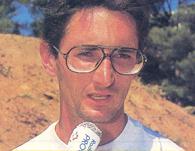 Xavier is still involved in BMX due to his profession working for a bicycle company in England.

A man who had to be nominated for the European Hall of Fame of BMX.

Rememorable Events & Results:
The big thing for me was definitely the World Championship in 1984 in Japan, it was my first or second big trip, my first world (I missed Slagharen 1983!…), I was 18! It was a dream. Leading from almost ....... start to finish this race and to be honest I never believed that Phil Hoogendoorn passed me on the finish line so I'm probably World Champion…. (Joke for Dutch community and especially Phil). * Remark GD: just for your peace of mind, I got the pictures to prove it Redois!

Any other Remark to be made:
I've really enjoy all my wins, I really think I've grown from my defeats. And was very proud of my picture on the last BMX Action cover - May 1989 - BMX has definitely change my life in my self-confidence, opening doors to believe and to achieve goals. I have loved this period of my live, training hard, travelling, meeting new people, of course racing, I 've loved to be stress before a final, challenging my friends Claude Vuillemot, David Kastler, Eric Minozzi…you know this feeling also of adrenaline… it was just good.

Stopped being active as a racer in: 1993 I thought I was too old?

Still Active in BMX?
Yes as a rider riding time to time with my son for fun…