Here the motivation concerning the nomination of Andy Ruffell to the European BMX Hall of Fame. Besides a pioneer top rider, Andy was a true promoter of the BMX sport during the first 8 years of BMX in Great Britain, as you can read.

PROFESSION AT THIS MOMENT (explain a little about your job, has sport helped you with this?):

President / CEO A3 Networks USA – A3 is a media group with TV broadcasts in 8 million households, various web sites and production companies ( www.watchA3.com ). My role is to develop the business as a whole, in particular take our TV interest's into other cities in the USA including New York and Los Angeles – then across the world.

I'm so grateful for what I learned all those years ago during my BMX career, there's the usual things you would expect like never give up and fight hard to be the best….but potentially even more than that it was that it allowed me to travel the world a few times while I was young enough to really learn about people and human nature. The biggest lesson of all is that basically we are all the same no matter what religion or where we are from.. If I had my life again I wouldn't change a thing.. BMX rules !

MAIN RESULTS DURING THE YEARS (championships, nr. 1,2,3 spots) at

EUROPEAN LEVEL:        Not sure? Always on the road I think I missed most of the Euro races

* Starred in various commercials for Kelloggs and Readybrek (UK, Europe and Africa)

* Awarded young cyclist of the year by Minister For Sport 1984

* Made over 500 TV appearances around the world

WAS A MEMBER OF THE FOLLOWING TEAMS:

WHICH BRAND OF BIKES DID YOU RACE:

BEEN ACTIVE IN ANY OTHER SPORT:

only as a hobby – Motorcycles / Snowboarding

ANY ADDITIONAL REMARKS TO BE MADE:

Andy, now 41, has also developed a significant career in television and hosted 7 series over 4 years of the nationally televised BMX Beat on the UK ITV network as well as presenting the prestigious Kellogg's BMX Championship on Channel 4 for three years. He has appeared in over 400 TV shows in the UK and around the world including two appearances on BBC Superstars and starring in various commercials for Kellogg's and Ready Brek.

Andy also founded and produced several major BMX and Skateboarding events including the European BMX Freestyle Championships and the world-renowned ‘Holeshot' event, which brought together the world's best BMX riders and Skateboarders – a forerunner to the modern ‘X Games' – all with international TV coverage.

In 1987 he decided to retire from competitive sport and developed his next career behind the camera as a producer at London's BiG Group Communications Agency. Over the next few years he produced a wide range of award winning entertainment programs and documentaries around the world including Asia and North and South America for clients including British Airways, Johnnie Walker, Cathay Pacific and Cunard Line.

In 1995, Andy undertook one of his greatest challenges when after a chance meeting with Kanya King they created and launched the MasterCard MOBO Awards – now one of the world's largest televised urban music events. The event has just celebrated its 10 th anniversary and is broadcast nationally on BBC1 in the UK and in 20 countries across the globe. Since launching The MOBO Awards, the parent company has grown to include TV Production, Publishing, and Music and Internet divisions.

Ruffell is also Founder and CEO of ‘DanceStar' – the global dance music awards platform. It is an event concept developed across three continents with the first DanceStar show – ‘The World Dance Music Awards' taking place on June 1st 2000 at London's Alexandra Palace. It was broadcast on the UK's Channel 4 network and various territories around Europe reaching over 100 million households worldwide.

March 2002 saw the launch of DanceStar USA – The American Dance Music Awards that took place at the prestigious Jackie Gleason Theatre in the dance ‘Mecca' of South Beach, Miami. It became the most talked about event of 2002. The 2003 show took place live on the sands of Miami Beach and was seen in 54 countries across the world – the most watched electronic music show in history…

Andy has now Created, Produced and Exec Produced more than 18 world class televised award shows and over 50 other event, TV and video projects around the world in places as diverse as Kuwait, Hong Kong, Venezuela and mid Atlantic on the QE2.

The future looks good for Andy Ruffell with his consultancy company advising US and European corporations on televised event development, he is President and CEO of A3 Networks, a TV channel in south Florida which is about to expand across the USA. Also three new globally televised events are in development with major broadcasters including a Latin Version of DanceStar.

Andy has now based his operations in Miami and New York with AR Consulting Inc encompassing Music, TV and Radio Projects.

Thanks Andy for completing this form. GD.

"Old Skooler ANDY RUFFELL scoring in the USA with his Music Awards programm and.... showing he is proud of his BMX background. Very well done ANDY" 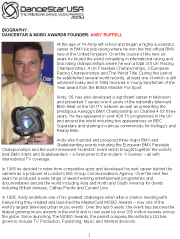